It feels like a lot has happened since my last post, but here are some of the highlights. 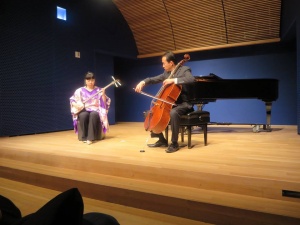 I performed “Not a Singe Cloud Exists” by Yoko Sato at Yoko Reikano Kimura’s shamisen recital on January 8. Yoko worked very hard for this recital and sounded fabulous. I was so proud to be part of this concert.

It was also great to be part of New Opera Showcase 2017 – an event presented by The National Opera Center America – with the SONOS Chamber Orchestra under the baton of Erik Ochsner. We had such fun in the cello section too! 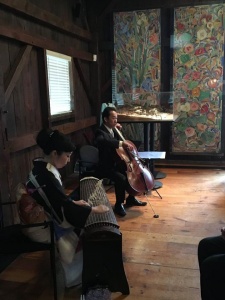 Duo YUMENO performed at the new years party of the Japan Society of Fairfield County, CT on Jan 22. This was our second performance at the Japan Society, but we already feel like we are part of this wonderful community. 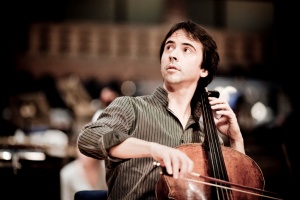 Jean-Guihen Queyras and Alexander Melnikov’s recital at Carnegie Hall was simply magnificent. They performed Beethoven’s A Major Sonata, Chopin’s Cello Sonata among others. Queyras was able to bring out so many beautiful colors from his instrument, and his playing made me realized that there is so much more to explore in my music making. The possibilities are infinite.  So inspiring!

I didn’t expect much from Martin Scorsese’s latest film, Silence, but was moved by the strong performances of wonderful actors, powerful images (and the incredibly subtle sound designs) and the complexity of its themes. As a Japanese, I can assert that this is one of the most evenhanded and honest depiction of Japanese people and culture in a mainstream Hollywood film.